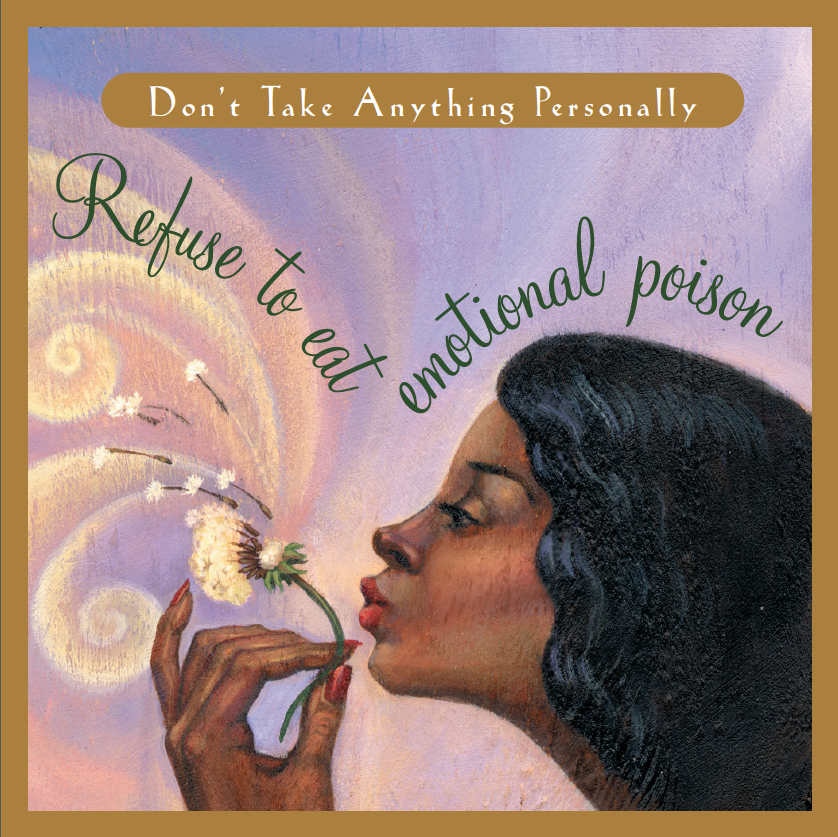 All people live in their own dream, in their own mind; they are in a completely different world from the one we live in. Even when a situation seems so personal, even if others insult you directly, it has nothing to do with you.

Question: The second agreement, “Don’t take anything personally,” is the agreement I really want to master in my life, but I can’t see how someone’s criticism of me is not personal. If my boss says something that really hurts my feelings, how can you say this isn’t personal or that it’s not about me?

don Miguel: I want you to imagine that one day you wake up and find yourself in Europe during the Middle Ages. Imagine what these people believe about everything — about religion, science, medicine. You see people suffering because their lives are ruled by superstition; they live in constant fear because of the lies they believe. There are people who don’t bathe for months because it is a sin. Imagine the moral judgments of that society: what is right, what is wrong, what they believe is right or wrong.

Put yourself in that place, just for a moment. It is obvious to you that the social, moral, and religious rules of that time are based on lies, but for them it’s not that obvious. Knowing what you know, and knowing what they believe, are you really going to take personally what they say to you, what they believe, the way they judge you? Are you really going to feel emotionally hurt for the judgments they have about you when you know the way they dream?

Response: Well, I guess that’s true, but I would also understand that these people have a different worldview.

don Miguel: Everybody you meet has a different worldview, even now. Imagine your boss at work with those beliefs of eight hundred years ago. With the way you think right now, you will not even suffer because whatever tantrum the boss has is not going to affect you. It is going to be funny. Of course you will refrain from laughing because that could have dire consequences. Laugh about the priests eight hundred years ago, and you were dead. You had to learn not to laugh at them.

It’s the same thing now. It’s simply that people have different points of view. One of the things I always suggest is to learn to make fun of yourself. Then instead of judging yourself or judging another person, you are going to have a great time.

Response: Okay. I get it now. Still, it’s going to be a challenge to think it’s funny when someone is putting me down or yelling at me.

don Miguel: Many of the funniest things that happen in our lives don’t look funny when they are happening. Later we can laugh, but at that time we are possessed by our own point of view. The next time you get angry, or jealous, or sad, put a mirror in front of your face and look at your expression. Who is behind that face? Just remember this: any time you see any human in anger, any time you see the envy or the jealousy of someone, he or she is possessed. It is nothing personal.

Question: I am doing my best not to take anything personally. I understand that it’s not about me, but when people criticize me or say something hurtful, I still feel really awful. What am I doing wrong?

don Miguel: There is nothing you are doing wrong. You feel like that because you believe what they say, because you align your beliefs with them. What someone says will only affect you if you believe it.

Imagine that you are a child, and you make a little mistake that angers your father. You don’t even know what the mistake is, but your father is angry and says, “You are a stupid child; you should feel ashamed of yourself.” You agree with your father, and put your faith in that agreement; you believe it 100 percent without a doubt.

You grow up and now you say, “I am intelligent; it’s not true that I’m stupid.” But when someone comes and says, “What you did was stupid; you should be ashamed of yourself,” you react with anger and it’s because you believe what that person said. You kept that knowledge in your head, the agreement that it’s true that you are stupid. Later, when someone touches that little splinter, the reaction is a lot of emotional pain. But if you don’t believe what he says, you don’t react. You are going to laugh.