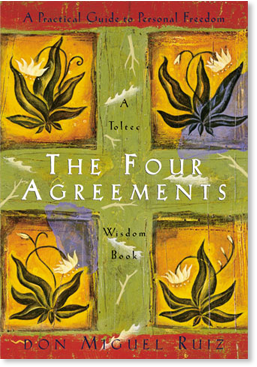 The other day, I was talking with Janet Mills, my boss, personal mentor, founder of Amber-Allen Publishing, Inc. and co-writer of several best-selling titles in the self-help genre including The Four Agreements, by don Miguel Ruiz. Our conversation was so illuminating that I feel compelled to share what I learned with others, in the hopes that if they are struggling with the second and third of don Miguel Ruiz’s “Four Agreements” this will be of help to them.

I told Janet why I didn’t connect with Ruiz’s seminal material right away. I explained that while I understand the value of the agreements, it’s their practical application that I struggle with. The first and fourth agreements, “be impeccable with your word,” and “always do your best,” aren’t so tough, but the second and third, “don’t take anything personally,” and “don’t make assumptions,” have proved to be very difficult to practice.

I know that I shouldn’t do those things and I understand why, but when someone treats me poorly, or I perceive that I’m being treated poorly, it’s hard for me to (1) not take the poor treatment personally, and (2) not assume that it’s about me, because of something I’ve done to cause it. In the book, The Four Agreements, don Miguel Ruiz does a wonderful job of explaining why we shouldn’t take anything personally or make assumptions. What I feel is lacking is a formula for how to do those things: I wanted to know how to put those agreements into practice in my everyday life.

When I said that to Janet, her response was succinct and precluded any new-agey rhetoric that’s never resonated with me. “That’s really simple: You have to think of it in terms of energy,” she said. “First you have to understand that everything is energy. Your thoughts, feelings, and assumptions are energy. You choose how and when you use your energy, including the energy that makes up things you can’t see or touch, such as your feelings and assumptions. When something happens, and you take it personally, you’re investing your energy into that negative action. Stop and consider if it’s worth it to you use your energy, any amount of energy, taking something personally.”

When I heard this, it was one of those moments when separate components of a complex puzzle I’m working on suddenly click into place to create a clear picture. I’d had all the pieces, but somehow I wasn’t able to put them together in a way that made sense to me before. Because of what Janet said, I was able to break it down fairly simply. Energy is a thing, and a thing is an object. An object is malleable. If energy has a physical body no matter how many parts per million, then there is the possibility that I can shift it and move it. Her words bridged the gap from existential concept to action. Suddenly, the agreements I’d been struggling with were actionable and that made them seem real and attainable. The idea as Janet presented it was something that I could work with. Using her line of thinking, I could literally mold my feelings and reactions into something different than what I started out with like a sculptor would with clay. Except instead of using my hands, I would use my will. My desire—to not expend energy unnecessarily on negativity, to live in a world where I created my own experience—would be my only tool.

“The same goes for making assumptions,” Janet continued, “you have to make the choice—and you always have a choice—where you want to place your energy. If you decide that it’s not worth spending the energy or time to worry about something you’ve taken personally, you can choose to shift that energy into something that you do find valuable.”

Because I tend to be analytical and think in a linear pattern, her method of implementing the wisdom behind the second and third agreements became something that I could put into practice. A+B=C. Don Miguel Ruiz told me what to do, Janet was now telling me exactly how to do it. I could follow Janet’s advice in a way that not only allowed me to practice the agreement, but also channel energy I would have wasted agonizing over an illusion into something that would benefit me. Instead of taking a co-workers attitude personally, or assuming that someone’s attitude has anything to do with me, I can focus instead on a great project that I’m really passionate about. Instead of worrying about why a friend hasn’t called me back (did I say something offensive?) a romantic interest doesn’t seem that interested (maybe he doesn’t find me attractive?) I can call a friend, or take myself out to a movie or restaurant that I’ve been wanting to try. I think this is the key: allowing myself to enjoy what I’m doing at any given moment and choosing to do things that make me happy.

What I’m learning is that in being more aware of how I expend my energy—emotional, spiritual, and professional—I’m training myself. After a while, like any new pattern we practice, it becomes routine, and then eventually with enough repetition, a lifestyle. Right now, I have to remind myself how I want to apply my energy and it continues to be a daily practice. Now that I have the agreements and thanks to Janet, the tools that will aid me in implementing them, I’m looking forward to the day when it’s no longer a practice, but a whole new lifestyle.